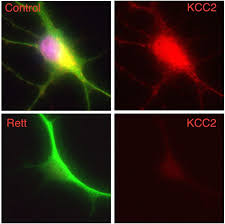 Rett Syndrome is a rare but severe neurological disorder that causes autism-like behavior in young females. It has long been known that behind the condition is a genetic mutation, and researchers are now claiming to have found an absent molecule that facilitates regular nerve cell function and development in healthy brains.

Since it was first described by Austrian pediatrician Andreas Rett in 1966, Rett Syndrome has been the subject of some conjecture over where exactly it fits into the classification of neurological disorders. Babies born with the condition generally develop as normal for the first six months or so, at which point certain skills begin to deteriorate resulting in difficulties walking, crawling, using their hands and other activities requiring muscle coordination.

For its part, a team of Penn State scientists very much considers Rett Syndrome a form of severe autism and says that by unearthing the mechanism behind it, it can potentially develop treatments for a range of autism spectrum disorders. Working with nerve cells sourced from Rett Syndrome patients, the team found that a molecule called KCC2, which is critical to normal cell function and brain development, was lacking.

“KCC2 controls the function of the neurotransmitter GABA at a critical time during early brain development,” says Gong Chen professor of biology at Penn Sate. “Interestingly, when we put KCC2 back into Rett neurons, the GABA function returns to normal. We therefore think that increasing KCC2 function in individuals with Rett Syndrome may lead to a potential new treatment.”

Also promising was the discovery that treating the impaired cells with a drug called insulin-like growth factor1 (IGFI) boosted levels of KCC2, effectively restoring function of the GABA neurotransmitter. IGF1 has previously been shown to reduce Rett Syndrome symptoms in mouse models and is currently being used in phase two clinical trials in humans. But the process by which is actually works hasn´t been entirely clear.

The team´s findings are therefore promising in two ways. Firstly, that it goes some way to explaining how IGF1 has this effect on brain function, and secondly it raises the possibility of finding other small molecules that can target KCC2 in a similar way, possibly leading to treatments for Rett Syndrome and other autism spectrum disorders.

“The most exciting part of this research is that it directly uses human neurons that originated from Rett Syndrome patients as a clinically-relevant disease model to investigate the underlying mechanism,” says Chen. “Therefore, the new drug target discovered in this study might have direct clinical implication in the treatment of Rett Syndrome and potentially for other autism-spectrum disorders as well.”

The research is to be published on January 4 the journal PNAS.